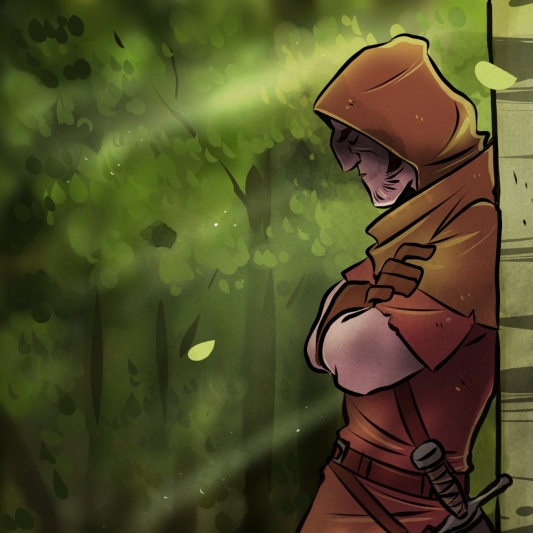 Barth felt the tug of the call. A knot had been tied, a plea rang out, and he was part of the forest’s answer. It would go on this way until the forest felt his service was complete. “Bent Bow, again. The creatures of the ebb never rest.”, he thought to himself. With that, he was drawn back into a substantive form in the clearing.

Barth never knew who to expect to show up with him, though he prayed there wasn’t a fucking briarlock. He didn’t mind bleeding for those he served, but he preferred if only his enemies delighted in his pain. This time, though, something was different. Much different. He saw more than a score of Thornwatch members in the clearing, though he could sense they weren’t all summoned with him. If they were, he was afraid what horror would lead the forest to sending a force of this size, but lacking that… why would so many knots be tied in the same place at the same time, summoning this many groups?

Around the edge of the clearing, there were at least 8 trees with a knotted wreath around its trunk. Twainward, Bent Bow, WagonWise and Crow’s loop all laid on various trees, and since all of the parties still stood in the clearing, none of them had been tied against their purpose. None of it made sense, until the ebbwitch rose from a growing purple puddle in the middle of the clearing cackling.

“Ah, you all came!”, she exclaimed with a combination of joy and derision. “What is the meaning of this, you abomination?”, asked Barth with a snarl, drawing his sword. “Why, there are innocents in trouble, and the forest has sent you to aid them. If you take a look in the trees above you, you’ll see all of them. They remain under my control, as they were when they tied these knots that bind you to this place.”

The witch’s treachery knew no end. Nearly a dozen children were bound in thick ropes of ivy high in the boughs of the trees, a dim violet glow clouding their vision. Mind control was not unusual for the witches, but none of the members of the Thornwatch in the clearing had ever seen it on this scale.

“With so many of us, you don’t stand a chance. Your efforts have been in vain, you wretched bitch.” Barth spat. The others began drawing weapons and advancing on the witch. “You think I have so little foresight, you pathetic apparitions. You’re stuck here until you’ve delivered the young from danger. Or, of course, they die and you fail. I don’t intend to stay and observe your suffering.” With that, she sank back into the ebb, and the ivy around the children began tightening its grip.

Many of the members of the watch began climbing the trees to free the children. It seemed like a simple enough task; the witch didn’t even stay to thwart their efforts. There was still a feeling of dread in the air, and Barth felt that there was some scheme the witch had enacted that he didn’t understand. Cutting a child out of the tree, and dispelling the mind control seemed too easy. Too basic.

Suddenly, a rumble rolled through the clearing, its source a few meters into the wood. It came from all around, as if the clearing was an echo chamber. As they all peered into the forest, they began to realize what was happening. A towering wall of ebb had encircled them. Even if they freed the children, they would not truly be out of danger, and their task would not be complete. All of the children, and the souls of the Thornwatch sent to protect them, would be trapped in the prison of ebb.

A few of the children had already been cut down, and the sages that had been summoned were chanting in low voices over them to free them from the witch’s spell. Slowly the puddle of ebb the witch had melted into began to open up again in the clearing. Barth hoped she dared reappear so he could drive his blade into her. If she could be killed, it was likely the walls of ebb would subside. Surely they were a manifestation of her twisted magic, unlikely to be broken while she drew breath. The witch was not what rose from the ebb. Instead ebb-tainted beasts began climbing out of the muck.

It seemed that there were an endless supply of slavering wolves, vicious serpents that reared up the height of a man and had poison oozing from their fangs, and last a creature Barth had never seen before and hoped he’d never see again. The creature reared up as it escaped the pool of ebb, rising above the tree line. It was the height of two men, and looked like a bear with spiraling horns erupting from its forehead, and thick black bark covering its body. It’s gaping jaws held 2 rows of razor sharp teeth, and it began bearing down on one of the sages who was waking a boy from his nightmare slumber.

The fighting had erupted from every side of the clearing. Weapons drawn, and spells being whispered to shield or strike, the members of the Thornwatch were desperately trying to keep the creatures away from the children. Barth, two other guards, and a blade all dove between the bear-like creature blocking it’s path to the sage that had swept up the young one he’d been chanting over. The first sweeping paw knocked the other guards down, while the Blade dove under the swing and thrust a dagger between two of the bark plates of armor.

The creature made a guttural sound as the blade pierced its hide, and it quickly tumbled back before lowering it’s head and goring the blade with one if its horns. As it reared up again, its target was thrown out of the fray, landing lifelessly in the branches of one of the trees. Barth glanced at the chaos around him as fear crept into him for the first time he could remember. The serpents reared back and struck with ruthless precision; one of them had dragged a young girl from a tree back into the ebb. As it dove under the surface, the 3 Thornwatch members that she had summoned faded from view, their mission had failed.

Many of the wolves had been slayed, and a small group of sages and greenhearts had gathered many of the remaining children into a small area and had sealed it with wards of protection and healing. A pair of blades had devised a strategy for the serpents, with one drawing attention feigning injury or acting as if they would attack head on.
Their partner would wait until they reared up for a strike to draw a sword or dagger up the underbelly of the creature, splitting it from belly to throat. Others began employing this strategy, working in teams to eviscerate their scaly foes.

The group’s focus turned to the hulking beast threatening Barth. It could sense that they were closing in, and gave a deafening roar. As it did, its bark armor began to crack and tumble off. Underneath, its thick quills began to raise and a second later the first barrage shot out at those approaching from its sides. As Barth watched many of his allies were impaled by the barbed projectiles. The greenhearts concentration was focused on their protection spells, only occasionally breaking their gaze to offer minor healing to someone nearby. It wasn’t enough. More and more of their force was laid low by the quills or the slow creep of poison from the serpents.

Before he knew it, Barth, a single sage, and a blade were those left that could go on the
offensive. The greenhearts could not expend energy on the creature, for fear that if they broke the protection spell the children would all be quickly made a meal for the beast. The sage sent a blistering fireball into the face of their foe, searing it and leaving it blind momentarily. Barth and the blade by his side took this opportunity to charge. The quills covered the back and sides of the monster, so their only choice was to try to attack from below. They felt the heat on their backs as a second fireball struck, and they began thrusting upward. As Barth glanced to his right, he saw the blade grab one of the beasts horns, swinging onto its shoulders. It surged forward toward the sage, slashing her open with it’s claws. In her dying breath she whispered a last spell that sent thorny roots from the ground, entangling the creatures legs.

With Barth below, and the blade above, they knew that this was their last chance. The
greenhearts could turn to offense, but they would not hold up against the ebb-beast.
A paw swung near his head as the creature reared up, trying to knock the blade free or disentangle its back paws from the thorny briar. Barth dodged left, then sprung at the creature, taking a desperate chance to stop it. He jabbed his sword up into its chest, and it tumbled down on top of him. At the same moment, the blade drew his daggers from opposite sides of the beast’s neck, slashing deeply into its throat.

Barth struggled out from under the dying creature and the blade leapt off as its head crashed to the ground. They had beat it, but the victory felt empty. During the battle a few more of the children had been struck down, sending the spirits of their protectors back into the heart of the forest. The others lay lifeless around them. The greenhearts that remained stopped their chanting, and a few of the terrified youth began to look around at the carnage. They quaked with fear as they realized what had happened around them.

Victory against the ebb-possessed creatures of the forest had been won, but the job was far from done. How were they going to get these children over the ebb wall and back to their village? What if further horror spilled from the ebb pool? As Barth and his remaining companions tried to assess the situation, the witch’s voice rang inside their heads. “Congratulations. A few of you remain, and a surprising number of my victims still live. I enjoyed watching so many of your comrades fall to my pets. I am curious what your plan is to reunite those you’ve saved with their families. Nightfall is coming soon. I wonder what will be left here when the sun rises?”