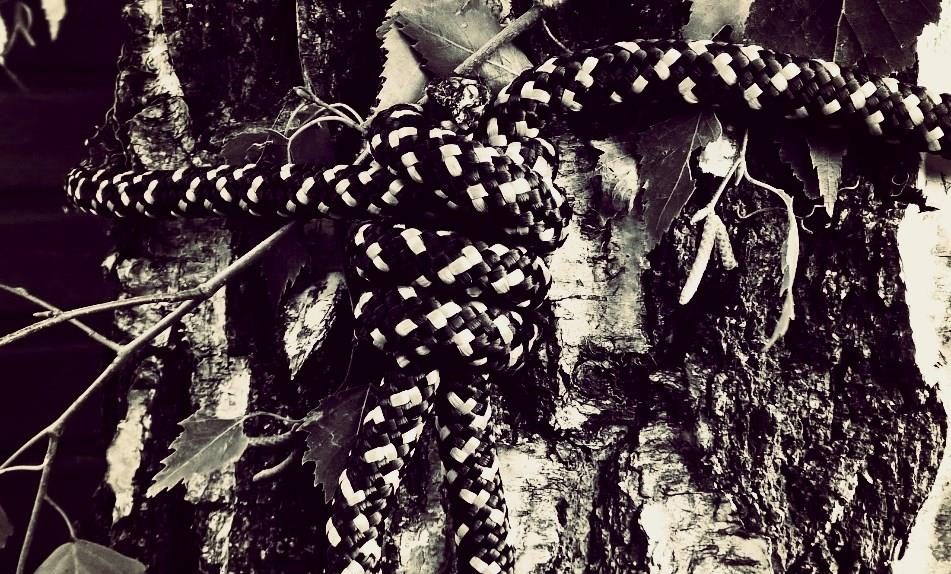 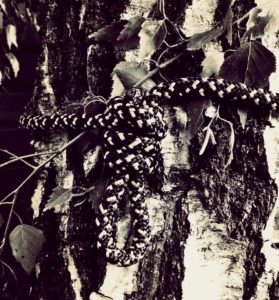 You know, there is a tale ’bout this knot,
’bout foolish gals ‘n guys and their lot.
***
Once there was One. A silly billy.
Don’t know his name, maybe t’was Willy?
But that does really matter not,
Matters more why he’s in the wood.
Why the boy is in the birch grove.
What is it, he wants to prove?
Has come to bind a knot, with all his grief,
That’s his business here, afterwards he would like to leave.
You must know this one, many siblings he has got.
Seven older, seven younger, you see: that’s a lot!
And what a lovely mother he has there,
Protects the others, life‘s so unfair!
Loves only them! Oh, he is so certain.
His poor lil’ world lies behind a foolish curtain.
It’s hard! With tears of vengeance: all just blurs,
Binds the knot as well he can: Justice shall occur!
Oh, he will show ’em! Show all of them!
Never they laugh ’bout him again!
Calls the Executioner, a spirit that is unforgiving.
Broke its oath once. Never again will he give in!
Call him and then point to one poor fellow.
Be assured: one awaits a future full of sorrow!
Finally the knot comes nicely along.
Finally it seems the deed is done.
But where’s the member of the guard?
If you call the guardian won’t you become its ward?
How long already does the boy await?
Maybe go now? Already it’s getting late!
Coolness creeps beyond his cape.
It’s the coldness when playing with uncertain fate!
Run home? His anger dwindles. So unsure…
Turns towards home. Alone he is no more!
Behind him looms the specter grimly,
Cries out the boy now very thinly!
The specter: “Name one and one’s end is ‘neigh!”
The boy: “Specter, You mean like in today?”
The specter: “Name one! And I mean like in right now!”
It seems: not all too eager the boy will bow,
To the grim specters commanding wish.
Fells sensation like a cold served dish.
Yet in the boy are growing doubts!
‘ Take my mother’, he wants to shout.
The boy: “My mo…”, Is all that leaves his lips.
His stomach freezes. Oh these cold grips,
That clutch his beating heart and aching mind.
Traitor! Can he be one of this rotten kind?
The grim specter: “Yes! What’s that you wanted to mutter?
Was it something ’bout your mo-mo-mother?”
The boy: “No! Never! …could never name her!”
The grim specter: “Indeed. Couldn’t. That would really shame ‘ya!
So name One! Who shall it be?
Name One! And you shall be free!”
Oh? Who to name? One of his bros or of his sis?
Who could he name, who wouldn’t be missed?
One of his brothers, maybe: Michael, Brian or Stu?
One of his sisters: Mary, May or Peggy-Sue?
That’s impossible to choose! Tears fill his eyes.
How could he choose a family member’s ill-timed demise?
An idea? An escape. A last recourse!
Where the boy won’t be plagued by unbearable remorse!
It’s not ’bout them! Not any more!
The boy feels confidence like none before.
The boy with steady voice now: “So take me!”
The grim specter grins: “So shall it be!”
***
Learned his lesson too late like lots before:
So better be careful with what you wish for!