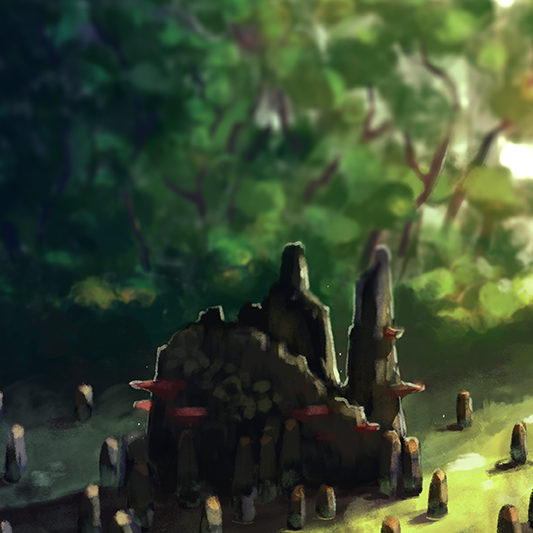 We are ghosts, summoned out of the aether for that which is too much for those on the material plane to handle. We are summoned through knots, which vary based on the need and the person tying them. Different members call it different things, but when a knot is tied for the wrong reasons or by the wrong person, I call it a bramble. These are not easily untangled, and most Thornwatch do not take kindly to being summoned under false or wrong pretenses.

Near the end of last spring
we were called to fight a huge threat – a monster that would put the Owl Beast
to shame. Upon arrival I noticed two of my brethren – a Sage I had dealt with
before and a surly Warden – were already there. In front of them was a young
man, holding the limp body of a young woman. He was sobbing, and the front of
her dress was covered in blood. The Warden had her sword out, and motioned for the
Sage to flank him.

“Where is the beast. Tell me
where, child!” She barked at him. The young man seemed taken aback, and was
speechless.

“Whu-how…you’re real!” His
eyes were wide, and jaw was slack. “You came! That’s great! I can- I mean, I
need your help-” The Warden scanned the trees, her knees bent.

She looked at me and
growled, “Find out where it is. NOW.”

I bent down near him, and
softly asked, “Tell us child- where is the beast that did this?”

“Beast?” He blinked, and
rubbed his nose with his sleeve. “No, no, see I just needed some of you, any of
you to come. So I tied the only knot I know.” The Warden straightened up, and
whipped her head around. I thought she might charge him.

“We are NOT your
errand-mongers, child!” Her teeth were clenched.

“Something evil is nearby,”
the Sage murmured, staring at the girl.

“Wha- no, I mean, I really
do need your help, but I don’t have any beasts to fight. I thought since you
all know…you know, magic, you could help her…”

“You called us to revive
her?”

“Well….yes.”  He stared
at the Warden, then glanced at the Sage who still looked at the dead girl and
sighed. The Warden put her back to him, and placed a hand on my shoulder.

“We’re leaving.” She
sheathed her sword and began walking away.

“Wait – no! You have to help
me!” He stood and cried out. Blood was spattered all over his front.

“That DOESN’T matter! Are
you going to help or not?” His eyes filled with tears as he clenched his jaw
and hands.

“It doesn’t matter because
we are not helping.” The Warden called over her shoulder.

“Because you can’t or
won’t?!” The young man’s teeth were bared.

“Steady child-” the Sage
took a small step back.

“If you won’t help me,”
his voice sounded with echoes that burned my ears, “then you won’t be
leaving either!” His skin began to crack, and purple wounds began to erupt
across his face and arms.

“Move! Get over there!” The
Warden pointed with her sword and charged.

After the battle, I set the
Sage down gently against a tree so he could rest, and nurse his wounded
shoulder. I’m still not sure what he was really trying to do, but near as I
could find the girl became an unwilling participant in his ritual. The Warden
ran his corpse through.

“Making sure,” she breathed,
shallow and quick. “The Thornwatch should not be so idly summoned.”