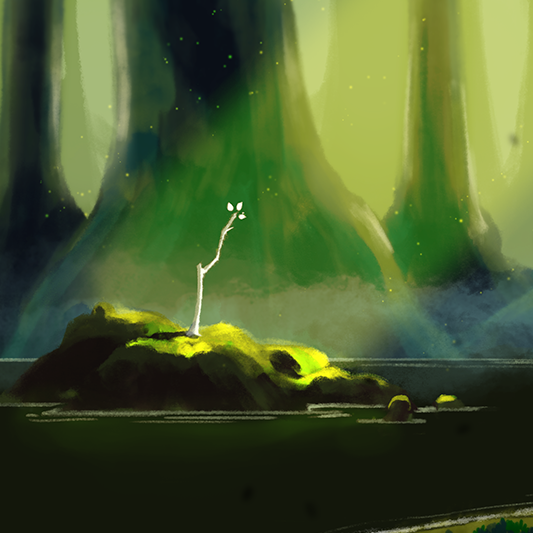 The forest had drawn silent all around Mikael. Small birds and other prey could sense the hunger in the gathered predators and were keen to avoid being the next target. Shrill shrieks came from the two gliders in front of him as they lashed out with claws and attempted to knock him into position for a debilitating bite. He dodged and weaved around the extended paws, but made no move to counter them.

A snapping branch behind Mikael was all the warning he got and all that he needed. Reaching across his chest Mikael freed one of his daggers, crouched low, and launched himself straight back and parallel to the ground. As the third glider sailed over him in its failed ambush, Mikael drove the dagger into the shaggy tan fur of its underside and held tight. The eviscerated glider slammed into the ground well clear of him, bounced once, and lay still.

As the ambushing glider jumped at Mikael, the two distracting members of the pack also leapt towards him. The beasts had not accounted for his new position and rammed into one another, their enormous ears and stubby snouts mashing together into a ball of fury and hunger.

Mikael quickly regained his footing and checked himself for any injuries. None of the ambushing glider’s claws had managed to reach flesh, but his leather armor showed a couple of new gashes. More importantly, one of the sashes that wound around his body had been torn free and lay in the dirt a few feet back.

Mikael let loose a bellow of pure rage to combat the gliders’ gibbering squeals as they stood up and charged him. He readied his sword with both hands, blade held over his right shoulder, and ran to meet them.

The right glider was a fraction of a second quicker and lashed out with its long claws and a piercing shriek. Mikael spun to the right and out of the glider’s reach. He brought his sword around and used the momentum of his spin to sever the paw of the left glider as is attempted to swat him to the ground. The sword cleaved through the leg of the creature and lodged itself in the side of its skull. It skid to a halt as it dropped and Mikael leapt atop its corpse.

The remaining glider attempted to lunge at Mikael, thinking him distracted as he dealt with its companion. It had not anticipated an aerial assault. Mikael leapt from the left glider’s body and used gravity’s assistance to plunge his blade through the glider’s chestnut-colored back. He twisted the blade savagely and all thoughts of attack fled from the glider’s thoughts as it thrashed in panic. Mikael pulled his last dagger free from its binding and jammed it into the glider’s right eye. The thrashing stopped and Mikael quickly looked in all directions for anything else coming his way.

Nothing presented itself other than a few cautious chirps from some of the more bold birds. Gradually the forest choir resumed its many chords and Mikael sighed heavily as he freed himself from the mess he had made. He thought back on the encounter and snapped a hand to the now bare patch of his armor.

Jogging over to the strip of fabric lying on the ground, he picked it up and ran his fingers over the red cloth and its adornments. A dozen or so circles of stiffer leather were sewn into the sash depicting the achievements of its former owner. Some depicted plants with an increasing number of leaves showing progress in herb-lore. Others showed off the ability to find food or make fire where it would usually be difficult. A couple even showed strange creatures and gave the wearer bragging rights on killing that particular beast.

Mikael tied one end to the belt around his waist and another to a strap on his shoulder. It would no longer wrap around his body, but the badges covered the bare spot on his armor. Nine other sashes with their own various badges also wound their way around Mikael’s broad torso. Not one of them had a badge showing the bat-eared, shaggy creatures known as gliders.

Mikael looked at the inside of his left leather cuff. Nine slash marks were currently emblazoned there. Walking back over to the gliders, Mikael freed one of his daggers, cleaned it upon some scruffy fur, and carved three final tallies into the cuff. He had been tracking this pack of gliders for weeks now. They were fast creatures and normally avoided any open confrontation they could. Mikael had made sure they could never run far enough.

Mikael examined the bodies of the gliders one last time. The darker brown manes that began behind their large ears and followed their spines down to their tails matched the pack that had earned his sworn vengeance. The ambushing glider was missing a chunk of its left ear thanks to one of his former pupils. Seeing it dead gave Mikael a sense of peace he had not allowed himself since that day.

With a loud thud, Mikael sank to his knees and rested there. With his self-anointed crusade come to an end, what would he do? Going home was not an option. He could not face the anguished cries of mothers and the disappointed looks of his Elders.  Never again could he lead a group of bright-eyed young Lookouts to adventure and knowledge. Not even if anybody would trust him to.

Minutes passed to hours and the high sun dimmed into twilight with no other option available to Mikael. It suited him fine. He rose to his feet and stomped around a bit to get his circulation flowing properly. Off on the edge of the clearing he had chosen to stand against the pack, there was a small patch of vines. They had no intention of climbing the nearby trees or crawling about the forest floor, instead seeming to coil endlessly upon themselves within their claimed territory. They defended this land with long, wicked thorns sprouting all along the length of each tendril. Mikael removed his gloves, tucked them into his belt, and began to pull some of the barbed lengths free.

Everything he knew about what he had to do was in direct violation of all tradition and instruction. In fact, the only way he knew what to do was because of the verses passed down from elder to child on how to avoid it. The thorns bit deeply into his skin as he pulled segments free and even his scarred skin and deadened nerves cried out.

With several lengths extracted, Mikael stood and faced a nearby tree. With a steadying breath, he looped the vines around the back of the trunk and stretched out each side towards himself. He looped the lengths of vine back upon themselves several times intricately. Mikael stepped back as he finished and saw that it was done. From the front, there was a clear divide with vines flowing forth in either direction: the Twainward Knot.

Immediately behind him, Mikael sensed movement and whirled around with his sword drawn. It was immediately parried and knocked free from his grasp. Mikael reached for the dagger he had sheathed.

Before him stood a broad woman covered in amber leathers with a collar of plush, white fur. A large sword was held pointed at him and her hard eyes, one bright fuchsia and one deep celadon, warned him against any further action. Her dark forehead crinkled as she examined his knot and then looked back to him.

“You tie a Twainward, signaling a burden that no man should carry,” She stated. She glanced at the sashes strapped over his chest and then to the dead gliders. “Are you a Guide?”

“I am…I….I was….” Mikael said hesitantly. His voice began to crack slightly as it was finally stated out loud. The woman nodded.

“You are a Watcher of Thorns. An…an oath-breaker sentenced to exile and bound to aid those in need,” Mikael replied. The woman nodded again and lowered her sword.

Mikael hung his head and felt his eyes fill with tears. He had been hunting, running for weeks. He was not allowed to do so any longer.

“A…failure. A warden who could not protect his charges. A Guide with no Lookouts. A man who has lost everything,” Mikael choked out.

“So you left them to die?” The woman demanded. Mikael snapped his head back up to face her and narrowed his eyes.

“NEVER!” He yelled. Several birds fluttered away from the nearby trees as his echo copied his convictions. “I fought beside each and every one of them as they fell. I tried to help them escape when victory was no longer possible. They just weren’t ready! The Elders pressed for their training to advance, but they…they weren’t ready for this.” Mikael fell to his knees and broke down completely. Loose dirt crunched as the woman walked towards him. She put a hand under his chin and lifted his head to face her. He blinked until he could see her clearly.

“You called me because you desire a path. I can provide you with that,” She began. She held her left arm out to the side and her sword pointed out into the woods. Her left eye, shining intensely with its red coloring focused on him.

“I can offer you freedom from your burden. You will die in the forest, a noble and fitting fate for any Guide. It will be swift and without judgement.” She lowered her sword arm and extended her right hand to help him up. Her right eye, the green orb, fixated on him.

“Or I can offer you new purpose, new trial. A second chance to fulfill your duties and do right by your kind. I will be difficult and harshly measured by those you are charged with protecting.” The word “oath-breaker” echoed through the forest, seemingly without a source. Night had fallen quickly and completely. The forest itself seemed to hold its breath as Mikael thought about his choices.

He reached up and took the offered hand. The woman was surprisingly strong and hauled him to his feet. As he stood, the woman readied her sword and swiped it across Mikael’s chest. He flinched and jumped back a step, but realized he was unharmed. Instead of blood, he saw ten lengths of red cloth drifting gently to the ground. Herb-lore, fire-making, and wild edible badges winked in and out of sight as the cloth twisted in the breeze.

The woman strode over to the patch of thorns and Mikael watched the cloth blow away. She plunged her hand deep into the vines, far deeper than the growth should be. When she pulled her clenched fist free of the jagged tendrils, it held something shining with a silver gleam. Mikael turned to her as she walked back towards him and offered her closed hand, free of any scratches, to him.

He caught the offered item as she released it. It was a silver shield with three points on the top coming down into one on the bottom. Emblazoned on its silver sheen was a deep crimson rose. Mikael noticed that the woman had a matching crest pinned beneath her furry collar. Mikael pinned it to his own cloak and it replaced the red sash that had been there.