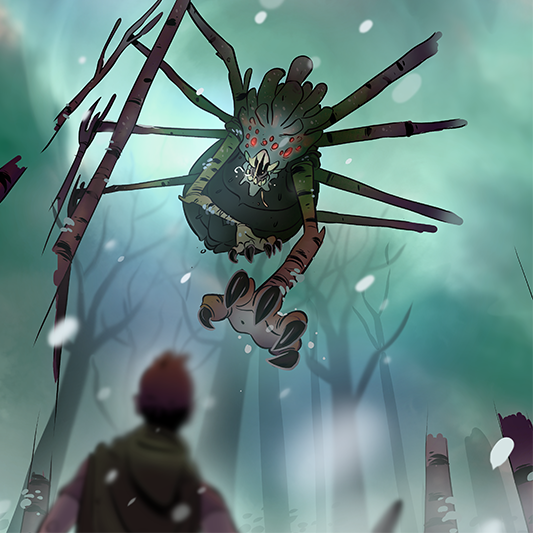 Death is Only the Beginning

He draws a burbling, tortured breath as he glares at the remainder of the glider pack lurking just out of reach. He no longer has the strength to lift his plain but serviceable sword, let alone pull it out of the alpha glider that still has its jaws clamped onto his leg. He hears his wife and child sobbing in fear behind him, and he wishes he could turn to look at them one last time. Instead, all he can see is his blood slowly dripping from his face onto the creature that he has slain, the creature that is his doom and that of his family. As his heart slows and he draws his last breath, rage and despair swirl and grow inside him, starting as a tiny flickering flame deep within his chest.

His thoughts turn to those he loves, and the anger and longing and sadness all blend into a burning knot of pain as he imagines the fate that will befall them as soon as he falls still. This pain feeds the tiny flame of anger, causing it to brighten and glow until it becomes an inferno raging through his entire being. With his pain and his rage and his love, he screams in defiance and surges up and forward with a sword in each hand, unwilling to let any harm befall his loved ones.

There is no thought needed for his actions, only the automatic dance of blade and claw and tooth and blood. It seems only moments before the rest of the gliders lay defeated and he turns to his wife and daughter only to see them sitting huddled against a tree, staring in wide-eyed fear. Looking down, he sees himself still entangled with the alpha in a growing pool of his blood mingling with that of the creature.

There is a brief moment of confusion, quickly shifting to acceptance and gratitude for being able to save his family. He bends down to wipe his twin blades on the glider alpha’s pelt, admires the fine craftsmanship and keen edges before sheathing them, then walks slowly towards his wife. She cowers and shelters her daughter under an arm, staring uncomprehendingly at her salvation. Gently, lovingly, he kisses her for the last time, and touches his daughter on the head. With a final caress, his hand cold on her cheek, he turns and walks slowly into the forest and fades away until his blades are needed again.